Spectators are still not permitted at any matches.

Lancing Football Club are one of many non-league clubs that are calling on the FA and DCMS to put in place plans to allow us to re-open fixtures to spectators at a safe capacity.

For now, however, we continue to operate strictly under FA rules and NO spectators are permitted in our stadium or at any home/away fixtures. Our stewards are present at all Culver Road fixtures, and already we have had to turn away many supporters of both home, and primarily away, clubs as we cannot allow spectators until authorised to do so.

Our safety measures such as a one-way system, temperature checking, frequent cleaning and social distancing remain in place. Our stewards continue to ensure the safety of all attendees and any verbal abuse or disregard of rules will result in removal from our venue. Our committee are a team of volunteers and although we are clear in our desire for the FA to allow spectators to return, we will always follow the most recent guidance to keep you safe.

Please see further details below. We look forward to eventually seeing our supporters back at Culver Road, and allowing us to recover from a challenging financial period without your attendance at fixtures.

Anybody in attendance, including players, coaches and a restricted number of officials must still complete our NHS Test & Trace form here.

Supporters and Clubs Flouted the Rules
The FA report that over the weekend, as clubs returned to pre-season competitive fixtures, they have discovered that some fixtures were played with spectators and, in a small number of cases, with a crowd in excess of 100.

The guidance regarding gatherings is a clear Government issued position. They therefore re-emphasised that ALL National League System pre-season fixtures should be played behind closed doors.

And they reiterate some further specific restrictions…
ALL friendlies involving Step 1 to Regional NLS Feeder Leagues Clubs should be played behind closed doors, until further notice.

ALL pre-season or other matches held at Step 1 to Regional NLS Feeder League grounds, including, for example, all County FA and League Cup Finals, should be played behind closed doors, until further notice.

This means the majority of the members of the Board and support staff cannot attend, either.

NLS and Women’s Pyramid: under negotiation.
The FA also say that they resubmitted a proposal for spectators at National League System & Women’s Pyramid games to DCMS.

Government Suspends Test Events: we have to behave ourselves, or we won’t be trusted to open the doors…
The Government suspended the test events for the return of spectators under Stage 5 of the Elite Sport Protocols, which much of the NLS does not fall under. As such, the FA are continuing their dialogue with DCMS separately to the Stage 5 pilot project.

The suspension however of the Pilot Events which had low spectator numbers shows that Government are sensitive to crowds of all sizes and as such, the presence of crowds at pre-season matches puts the longer-term supporter strategies at risk.

We’ll continue to keep you updated the best we can. 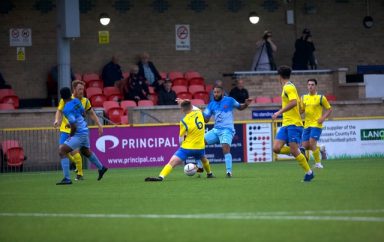