Lancing FC are preparing for a season in which they aim to be as successful as last season - telling local people: We need you more than ever.

Article by Worthing Herald. Our thanks to Steve Bone for including our latest update in this week’s edition.

The Lancers were top of the Southern Combination League and on course for promotion to the Isthmian League when football was suspended in March.

The bitter blow of seeing the season written off for clubs at their level then seeing manager Naim Rouane leave because of promotion being denied has been added to by the significant challenges of keeping the club’s finances going during the long lockdown.

But now Lancing have revealed just how busy they have been behind the scenes and how they are planning to make 2020-21 a season of success – hopefully with fans allowed back into Culver Road before too long.

Players returned to training – under strict distancing rules – in June and a programme of friendlies have now begun under new co-bosses James Rhodes and Kane Louis.

A club spokesman said: “Despite the 19/20 season being declared null and void by the FA, with the Lancers first team looking for promotion and securing the league title, the bulk of our players have committed for another season in the SCFL premier and with a new management team, we’ll be looking to challenge at the top again this year.

“Two of our most respected and experienced players from last season’s squad were appointed as co-managers for the forthcoming season, and with fresh enthusiasm and support from the committee and existing backroom volunteers, the future continues to look bright for the first team, and across our squads.

“Now more than ever, your local non-league community football club needs your support, and we look forward to seeing both regular and new faces once the season starts.”

This will be Lancing’s second year as an FA Charter Standard Community Club, one of only a handful of clubs in Sussex with this accreditation.

They have nearly 20 teams including youth, men’s, women’s, development and disability. The club have introduced a test and trace system, stadium improvements, temperature checking, funding for PPE and cleaning supplies and support for their most vulnerable players.

They said: “Our first team, women, under-23s and under-18s have nearly finished player registration and squads continue to be full and going from strength to strength, with a focus on development of players as individuals first and players second.

“We have been accepted into the FA Cup, FA Vase and FA Youth Cup for the season.”

Off the pitch, the Lancers have launched a new online club shop with kit partners O’Neills Sportwear to allow supporters to continue to purchase kit during lockdown and have it delivered.

A new partnership has been announced with Your Instant Replay, who will film all first team home matches, including friendlies, which will be uploaded to YouTube and social media.

There will also be a link with PAYPR, a charity that will offer tailored mentoring to young players and support services including mental health, finances, wellbeing, sex education, workshops, drug and substance misuse education, LGBTQ+ support, and other services for members.

The club added: “With a voided season and no spectators allowed to attend fixtures to date, we have been trying to find unique ways to raise money so we can continue to fund the 20 teams we operate.

“We have launched a new commercial brochure, offered temporary sponsorship discounts to valued local businesses who have struggled during the Covid-19 pandemic, and once we can welcome supporters back to Culver Road we have invested in an online payments and card machine system.

“We are also delighted that our women’s team have launched an online JustGiving fundraising page to raise vital funds for the Lancers, with a current target of more than £2,000 to reach.

“Two players will cycle over 200 miles throughout August to raise funds, and other fundraisers are also being planned for the coming month. If you would like to support the womens players in their fundraising efforts, or find out more, visit the Lancing FC website. 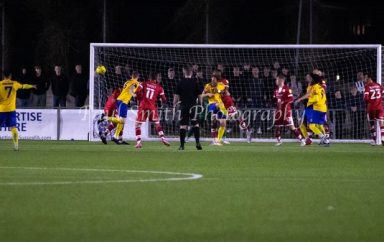