An enforced lay off since their away FA VASE victory against Reading City meant 5 weeks without being able to train as a team or play any football. But, to everyone’s relief Culver Road opened up to organised training on Thurs 3rd Dec. An almost full turn out underwent a tough session but an even tougher challenge faced them as they continued their recovery to fitness with a friendly against Isthmian Premier side Horsham at their magnificent new ground.

The gulf between the Isthmian Premier and the Southern Combination Premier was evident within the opening few minutes. Conrad was muscled out of possession in midfield, the ball was immediately switched to an attacking right back who wasted no time in getting a cross into the box, which was met with a diving header low, out of Mitch’s reach into the corner. Horsham increased their lead on 12 minutes with a superb volley from a free kick, which flew into the net in a blink of an eye.

Finn had a good opportunity to reduce the arrears shortly afterwards, breaking into the Horsham box at pace but drove his effort over the bar from a few yards. Horsham punished some slack marking, opening up the Lancing defence with a through ball which was toe poked into the bottom corner. There was no lack of effort from Lancing but they had no answer to the swift movement and deadly finishing of their opponents.

Horsham went four up on 22 minutes. A corner was not cleared allowing Horsham’s No.8 to break down the right and fire a cross into the six-yard box. A Horsham forward was quickest to react and met the cross with an unstoppable header. Three minutes later a fifth goal looked to be a certainty but Joe Kennard managed to get his body in the way and deflect the ball over for a corner. Respite was short lived as a couple of minutes later Horsham got their 5th, exposing a gap in the heart of the Lancing defence allowing their striker to run through and hammer the ball into the roof of the net.

Lancing showed a bit more enterprise towards the latter stages of the first half. Josh Gould was probing the home defence with some long-range passes, trying to get some service to the forwards. James Rhodes did well to win the ball on the edge of the Horsham penalty area, laying the ball off to Finn, whose goal bound shot was deflected wide for a corner. On the stroke of half time, Lancing gave themselves a lift with a quite stunning goal from Ben Connolly, who had hitherto seen very little of the ball.

Lancing made changes at half time. On came Kane Louis, Ebou Jallow, Darius Goldsmith and George Mitchell-Phillips.  Off went James, Mo, Ben and Matt. Before they could have any influence on the game, a misplaced pass from Joe Kennard fell straight to a Horsham forward who spotted Mitch off his line and executed a perfect lob to give his side a 6-1 lead. On 60 minutes, Mo, who had made a number of powerful runs from left back, gave way to Harrison Parker and Liam Hendy replaced Dave Sharman.

Lancing were not content to just go through the motions but raised their game, showing greater urgency and determination. Whatever was said at half time, there was a clear reaction from the players. Lancing were spending more time in the opposition half and were applying much greater pressure. Kane Louis was finding a lot of space with his movement and always ready to receive the ball and use it well. Josh Gould broke well down the right, cut in on his favoured left foot and put in a fine shot, which was headed clear. George Mitchell-Phillips used his pace to create a shooting opportunity but his shot struck the upright.

Mitch was lucky to escape punishment when his clearance fell to the feet of a Horsham forward who wasted a good chance by firing wide. Josh Gould was getting himself in more advanced positions and found himself being brought down in the box. Ebou Jallow made no mistake from the spot to reduce the arrears slightly. Finn finished a strong run with a good shot which forced a good save. George threatened, chasing a ball which split the defence but the home keeper was quick to pounce and deny him the chance to get a shot in. Horsham then rubbed salt in the wound when a diving header from the edge of the six-yard box gave them a 7-2 lead. Lancing were still looking to score and Finn had the last word with a left foot drive which was well saved.

You have to admire the thinking behind presenting the Lancing players with a tough challenge as they look to rebuild their match fitness. Horsham are a quality team, physically powerful and lethal in front of goal. Any mistake was punished ruthlessly. Loss of possession was quickly converted to a scoring opportunity.

However, it was encouraging to see that the players did not drop their heads in a far more even second half. Kane was instrumental as focal point and from a half time position of being 5-1 down to finish with a 7-2 score line was a tribute to their willingness to work hard.

With a home league match coming up on Tuesday against East Preston, Lancing should be ready for their Vase game on Saturday, home to Worthing Utd, whom we should congratulate on beating Edgware Town.

I have taken the liberty of choosing MOM. There were only three committee members at the game, me, Terry and Brian, numbers being restricted by our hosts, who were not ready to admit spectators. I must say they made us most welcome. I hope Terry and Brian forgive me for not consulting them. I give it to Finn. As usual, covered the pitch from back to front, a high physical output and had more goal attempts than anyone. Special mention also to Kane for his important influence in the second half.

Lancers Pick Up Their First 3 Points 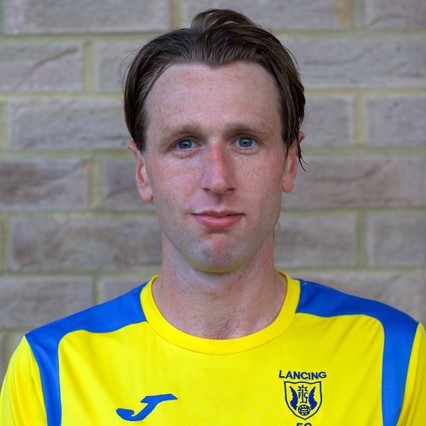