A 3-0 victory against local neighbours Worthing United secured the Lancers' place in the third round proper of the competition. Here is Dave Wilmott's report. 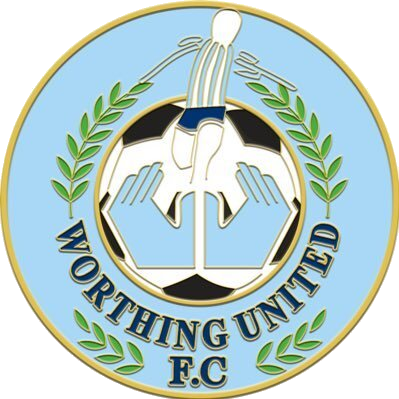 A capacity crowd of 300 were at Culver Road to witness the second-round clash between Lancing and near neighbours Worthing Utd (The Mavericks), managed by former Lancing manager Danny Woods, still a popular figure at Culver Road. There was a special significance for Lancing Chairman Steve Taylor, who had once occupied this position at Worthing Utd. Worthing Utd progressed to the second round, having been given a second bite of the cherry after their elimination by Edgware Town was ordered to be replayed after, apparently, Edgware had played an ineligible player.

For most of the first 20 minutes or so Lancing dominated possession but without seriously troubling the visiting keeper. A lot of intricate passing and movement left The Mavericks largely chasing shadows and being penalised for a number of fouls. James Rhodes and Ben Connolly had shots on target and Ebou and Josh each skied their efforts. Mo continued where he left off against East Preston, motoring forward with power and pace. He was getting to the bye line but his crosses into the box failed to have an end result.

It was fully 30 minutes before Lancing could convert their domination into something positive. Josh Gould threaded a superb pass through the eye of a needle. Worthing Utd. defenders were statuesque and could only watch as Ebou Jallow read the pass, running on to the ball and planting it into the net.

Utd caused a scare with a long ball over the top which found centre forward Dann Hills sprinting clear but Mitch Bromage was alert to the threat, racing from his goal some 30 yards or so, to deny Hills with a defender’s tackle.

The Mavericks began to get more into the game in the final 15 minutes of the half and had a couple of headers on in quick succession. The first was glanced across the face of the goal, and as the ball was played back into the box, Hills rose well but put his header over the bar.

Lancing increased their lead 4 minutes into the second half. A corner was played to Conrad Honore who spotted Josh Gould in space at the edge of the box. Josh curled a fine shot with the outside of his left foot which swerved away from the keeper, who could only stand and watch as it buried itself into the right corner of his goal. Conrad was in full flow, well supported by James Rhodes, Josh and Ebou, as they controlled the midfield. Mo was tireless, making run after run. A clever turn and spin away from his marker ended with a pass from the bye line to Conrad whose effort flew too high.

Dillon Nagle looked certain to reduce the arrears, capitalising on a defensive mishap but with only Mitch, to beat failed to get a good contact on the ball, which deflected off Mitch for a corner.

Lancing mounted a series of attacks as the second half progressed. Mo hit a cross which the keeper was able to push wide, and then had a shot from a tight angle which the keeper kept out at the near post.

On 65 minutes, the home fans cheered the arrival of Lew Finney, last season’s 49 goal man, making his first appearance since his return to playing. Matt Daniel, who had again showed some excellent support with Mo on the left, was the unfortunate player to give way.

Ben brought the save of the match from the visiting keeper, with a rocket from 20 yards which he was able to parry upwards. Josh was replaced by Will Berry on 73 minutes and George Mitchell-Phillips replaced James Rhodes. George had had a couple of strikes on goal, which were well saved. Lew was soon into the action and after a spell of pressure in the Mavericks box, Lew was upended by the keeper as he tried to work himself into a shooting position. Lew took responsibility for the spot kick and confidently found the bottom corner with the keeper going the opposite way.

Lancing continued to press forward with a good attacking run from Darius Goldsmith and Ben being inches away from latching on to a fine through ball.

The game ended with what was, in reality, a fairly comfortable win for Lancing. The Mavericks had a couple of chances but were never in a position to mount a serious challenge. I give them credit for not dropping their heads and also have to say I had some sympathy for Dan Hills who received a yellow card for what the referee deemed to be simulation, a “dive” in other words. Whilst it seems clear to me there was no foul, it did look as if Dillon tumbled after tripping over Dave Sharman’s leg, which was firmly rooted to the spot. Not a deliberate attempt to con the referee.

Lancing now advance to the third round, with a home tie against North Greenford Utd from the Spartan South Midlands Premier League. A team from the Ealing area. This will take place on Sat.19 Dec. And we hope to see another good crowd to cheer our boys to victory.

Ron George was selected to choose supporter’s MOM and he plumped for James Rhodes. This seems to be becoming a habit amongst our supporters but there was a lot to admire in James’ performance.

Management chose Josh Gould as MOM. An exquisite pass for Lancing’s opening goal and a sublime finish from him for Lancing’s second. Some excellent support to the rest of the midfield and a good range of passes. 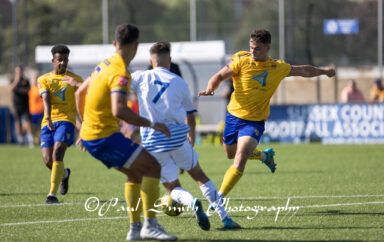 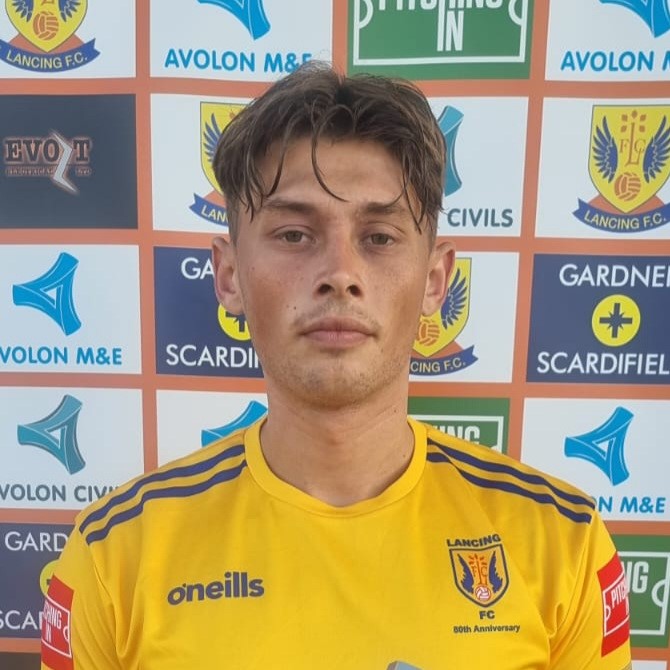