Dave Wilmott reports on Saturday afternoon's victory at The Shooting Field, thanks to second-half goals from Daniels-Yeoman and Caplin.

Wearing their dark blue colours bearing the names of sponsors G.M.Monk and Avalon, Lancing took the field with high hopes that, after battling to a tight 0-0 draw midweek away to Pagham, a win today would see them reach the semi-final of this competition.

It was a first start of the season in goal for experienced coach Matt Evans, coming in for regular keeper Mitch Bromage, who had been suffering for a while with a back complaint. But how would the comprehensive 8-1 win over Steyning at Culver Road a week ago affect the mentality of both sets of players as they kicked off this game?

Steyning were short of players with some regular first teamers missing through injury, only having a bare 11 available, which included a couple of their under 18 squad.

There was an early scare for Lancing when Matt Evans, playing the ball out some way from his goal line, mishit his clearance which fell to a Steyning player who tried his luck from distance.  But with Matt scrambling back into position, the shot sailed wide.

Steyning were having the best of the early stages of the game, closing Lancing down quickly, forcing errors and disrupting the rhythm of their play. Steyning were pressing Lancing high and playing with vigour and intensity. They were unable to take advantage of this and some of their attempts on goal were well off target. It needed a good block from Joe Kennard to prevent a goal bound effort from reaching its target.

Lancing gradually worked their way into the game. Mo Juwara went on a couple of promising trademark runs along the left flank but was forced inside and dispossessed before he could get beyond the defence. Lancing’s first threat on the home goal came from Ebou Jallow. Josh Gould saw an opening in the Steyning box and slipped a neat pass for Ebou to run on to but the ball was taken from him just as he was about to get his shot away.
A powerful run by Steyning’s number 5 occupied 4 Lancing defenders, and between them they were able to shepherd the ball away from danger for a throw in.

Matt Evans was called into action on 33 minutes with a fine fingertip save at full stretch pushing the ball over the cross bar for a corner. The ball was swung in dangerously close to the goal but Matt was alert and punched the ball clear. This was the closest either side had come to a goal. Steyning continued to pose a threat with some quick exchanges of passes and direct running from midfield. Another threat on the Lancing goal was averted by a vital interception by Finn, cutting the cross out for a corner.

It took until the final 10 minutes of the half for Lancing to get on top. Josh Gould found some good space wide on the right which looked promising but he was flagged offside. Soon afterwards, he made a strong run parallel to the edge of the penalty box, and was brought down as he was shaping to shoot. Darren Budd’s free kick deflected off the wall for a corner.

Lancing’s only serious effort on goal came shortly before the end of the half when Ben Connolly made a good run, finishing with a shot towards the near post which the keeper was able to push behind for a corner.
Changes to the Lancing line up were expected and this came after 8 minutes into the second half with Harrison Parker, Matt Daniel and Bradley Campbell-Francis replacing Mo Juwara, Ben Connolly and Kane Louis.

The only really nasty incident in the game came on 59 minutes, which saw Steyning number 5 receiving a yellow card (which could easily have been a red) for a dangerously high tackle on Ebou Jallow.

Harrison Parker and Bradley Campbell Francis were beginning to turn the tide in Lancing’s favour with some direct, forceful runs along the left. A good break by Harrison to the bye line enabled him to get a cross into the box but it was fractionally too high for Matt Daniel.  On 62 minutes Tom Caplin came on with Ebou going off.  Lancing were looking much more of a threat and came close to taking the lead when a free kick from Darren Budd, curled across the face of the goal, which may have got the faintest of touches from Matt Daniel,  and forced a save from the keeper with his outstretched leg.

The breakthrough eventually came as a result of another forceful run to the bye line from Harrison Parker, whose cross fell perfectly into the path of Finn Daniels-Yeoman who could not miss from close range. This seemed to settle any lingering nerves in the Lancing team. Bradley’s pace took him clear to the left of the Steyning goal but good defending by Steyning’s number 7 prevented his cross-reaching Matt Daniel for what would have been a simple tap in.

Lancing put the result beyond doubt on 77 minutes. The ball was played down the right wing. The assistant referee raised his flag for a player in an offside position but the player played no active part in the move, leaving the ball to run through to Darren Goldsmith, who broke clear before laying a pass in to the path of Tom Caplin,  who hammered the ball into the roof of the net from a couple of yards. Steyning players surrounded the referee but, as we all know, you should play to the whistle. The referee waved away protests and, correctly, allowed the goal to stand.

Lancing’s final substitution enabled Dave Sharman, replacing Joe Kennard, to reach 399 games for Lancing.  Lancing were able to see out the game comfortably and now progress to the semi-final, when they will entertain Lingfield at Culver Road on Wednesday 12th May.

As those of us who have been around for a while will recall from Saint and Greavesie days (The late Ian St. John and, still going, Jimmy Greaves) it was a favourite saying of Greavsie…….`it’s a funny old game Saint’. This could be said of today’s game. After a heavy drubbing from Lancing the last time these teams met, how would Steyning respond and would Lancing be thinking that they only had to turn up to claim another three points?

For most of the first half Steyning acquitted themselves well. Clearly stung by such a heavy defeat, they were determined to erase the memory of it and took the game to Lancing. It took Lancing some time to subdue their opponents but their strength in depth was too much for Steyning with Lancing substitutes able to have an important part to play allowing Lancing to take control in the second half. 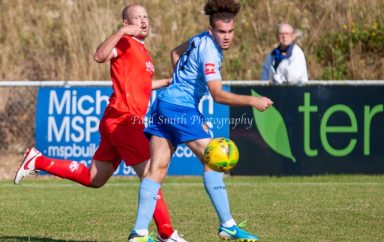