Dave Wilmott reports on Saturday's 4-0 defeat to Lewes in our first friendly of the season. 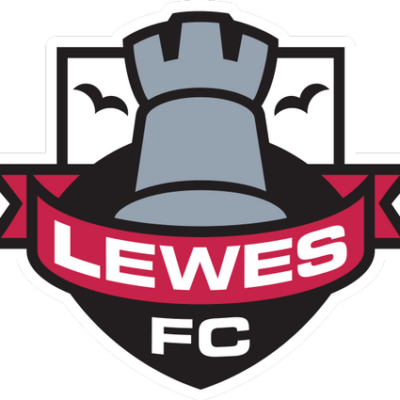 Lancing’s busy schedule of pre-season friendlies began with a tough challenge as they welcomed Isthmian League Premier team, Lewis to Culver Road. There were smiles on the faces of the Lancing Committee members as they were able, at long last, to welcome spectators (and 143 paying guests were in attendance). Some familiar faces were back to support Lancing and it was good to see the presence of former manager Naim Rouane, who did so much to contribute to Lancing’s progress.

The servery and bar were open and Terry Cartwright and Brian Cork were stationed at the entrance with the unique Merchandise cart. The Peter Bentley suite was also open so that hospitality food and hot drinks were available thanks to Tina and Brendan Carey. Regretfully, manager James Rhodes was kept away by illness.

The game was preceded by a guard of honour for Lancing legend Dave Sharman, who was warmly applauded by players and supporters as he received an engraved tankard as a token of appreciation from Lancing committee members, in recognition of having played an incredible 400 games for the club. Terry Cartwright also presented a personalised FIFA card.

Both sides began at a quick pace but Lancing had to be at their most alert to contain Lewes who were breaking forward and looking threatening. A number of vital tackles were made by Liam Hendy and Joe Kennard, in particular, to keep the visitors at bay. Hendy showed calmness and composure as he tried to orchestrate some possession playing out from the back.

Harrison Parker and Bradley Campbell-Francis made a couple of strong bursts along Lancing’s left flank without being able to create any pressure on the Lewes goal.

With 13 minutes gone, Harrison Parker was robbed of the ball by Lewes No.7, who quickly switched it to his No.10 team mate and in an instant the ball was nestling in the bottom right of the goal. The scorer came close minutes later firing a free kick from just outside the penalty area which whistled past the right upright.

Harrison Parker earned himself a yellow card on 17 minutes. Desperately trying to block a cross from the bye line from Lewes No.7, he was guilty of a dangerous tackle.

Lewes had the ball in the net on 19 minutes but the “goal” was disallowed for offside.

Lancing showed some promise through Matt Daniel who won the ball just inside the Lewes half and launched a quick counter attack with Ben Connolly but the Lewes defence held firm. Another intelligent move from Lancing saw Matt Daniel dropping deep to pick up a precise pass from the back by Joe Kennard. Matt switched the ball to Bradley who cut inside using his pace to lose his marker but the move petered out as the ball ran away from Bradley.

Lewes No.10 once again found the space to get on the end of a cross from the left bye line and had time to pick his spot in the bottom right corner to put his side two up on 26 minutes.

Lancing’s keeper was put under pressure by three green shirts as Lancing tried to hold on to the ball in their own box but he cleverly got himself out of trouble with a smart turn on his goal line. He was called into action to make a good save shortly afterwards from a dangerous in swinging corner which came close to going in just under the cross bar.

The final quarter of the first half saw Lancing under constant pressure and it was only a matter of time before Lewes increased their lead. A rapid move down Lancing’s right ended with the ball being laid into the path of Lewes No.7 who wasted no time in getting a shot away to give Lewes a 3-0 lead on 36 minutes.

Lancing kept their heads and continued to try to play out from the back but Lewes closed them down very quickly and some good defensive work by Finn Daniels -Yeoman came to Lancing’s rescue as Lewes threatened to add to their goal tally. This came close when Lewes No.10 struck the upright. The half ended with some sound defending from Lancing but with the visiting keeper having been untroubled.

Lancing made good use of their squad with only Giannis, Finn, Bradley and Ben staying on for the second half. There was the welcome sight of Mike Williamson making his return, after a year’s sabbatical for family reasons. Established Lancers Will Berry and James Waters came on with some new players, which included Mohd Zabadne, Ashley Wadhams, and Clayton Garner.

James Waters was busy from the start making headway into the Lewes final third. He got himself into a good shooting position early on but his first effort lacked power. He followed this shortly afterward with a more powerful effort, which the keeper did well to block. Lancing’s hopes of reducing the deficit suffered a setback when Lewes No. 6 got his head to a corner from the right to power the ball home on 57 minutes.

Harry Carter made his debut for Lancing, replacing Ben Connolly on 68 minutes and a minute later Clayton Garner was forced off with an ankle injury. Liam Hendy returned. Lancing had a lucky escape on 75 minutes when a Lewes strike on goal rattled the underside of the cross bar before rebounding to safety. Harry Carter showed a glimpse of his skill on the ball, executing a fine turn setting Bradley clear on goal but play was halted with him being given offside.

There was plenty of effort and hard work on display for Lancing as they tried hard to get something out of the game but Lewes matched them all the way and ensured that Lancing could not mount a serious threat on their goal.

The crowd were treated to some excellent football from a very young Lewes team who were difficult to contain with the speed of their attacking play. They were quick to close Lancing down and seize upon any error. There were some promising signs from some of the new players introduced by Lancing in the second half and I was particularly impressed by the energy shown by Mohd Zabadne and the composure shown by Clayton Garner until he succumbed to an injury. It was also pleasing to see that there were few signs of rustiness in Lancing favourite Mike Williamson. It was a good test for Lancing as they prepare for a season playing at a higher level.