A rousing second half performance from Lancing had the home supporters cheering but, despite a valiant effort they were unable to come back from a half time 3-0 deficit. 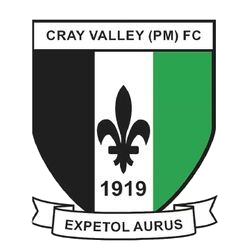 Lancing’s first home game since their promotion was graced by two special guests lining up with the team as mascots,Bluebell and Henry, the children of James Rhodes.

Opportunities were given to Clayton Garner and Tariq Brown ,Mark Godson was a starter and so was newcomer, 6 ft.3-inch Ansu Janneh, leading the forward line.

Cray Valley began with confidence and were quick into the tackle, moving the ball around at speed, and hitting some searching long balls to capitalise on the pace of Marcel Barrington and Francis Babalola, causing Lancing all sorts of problems .Mitch Bromage was kept busy and the defence was at full stretch to contain the visitors. The breakthrough for the Millers came on 20 minutes. A long ball from the back by Lancing failed to reach the intended target and was returned in a flash finding Barrington who burst forward and outpaced Lancing defenders, before burying his shot in the bottom corner.

Lancing’s first attack of some promise came from Mark Goldson, who did well to turn with the ball and resist a couple of challenges before unleashing a shot from just outside the penalty area. Unfortunately, Mark got underneath the ball and skied it over the bar.

The Millers increased their lead on 31 minutes. Liam Hendy was penalised on Lancing’s left. Jack Sammoutis floated the free kick in and the bounce got the better of Mark Godson, falling nicely for Francis Babalola to lift the ball over everyone before dropping in at the far post. Barrington was proving to be a handful and he evaded Will’s tackle and headed for goal but Mitch read the danger getting down to block at the near upright. Barrington continued to pose a threat and after cutting in from the right attempted to curl the ball with his left foot into the far corner. Mitch was at full stretch but able to put the ball wide for a corner. The ball reached the centre of the goal and seemed to hit the upper body of centre back Ali Tumkaya, rebounding into the net without him being aware of his part in the goal. 31 minutes gone and Lancing were struggling at 3-0 down.

Babalola looked certain to increase his side’s lead just before half time but Harrison Parker’s pace enabled him to catch him as he was about to shoot and slide in with a fine tackle. Harrison was then in action at the other end, reaching the bye line and hitting a cross to the near post which Tumkaya was able to deflect behind.

The second half began with Barrington bearing down on goal but denied a shot on goal by a superb tackle by Will Berry. The game was much tighter. Lancing looked a different team and signalled their intent with an early well-judged pass from Darius Goldsmith which Mark Godson controlled well before unleashing a left foot drive flew too high. Lancing again had Mitch to thank making a fine save from Matthew A-Warren, who had sprinted clear from halfway.

Lancing gave themselves a life line on 51 minutes. Ansu Janneh fed Alberto Lubanga, who left his marker on his backside, before hitting an accurate cross to the far post where it was met by Finn Daniels-Yeoman, with a firm side foot plant into the net.

Bradley Campbell-Francis replaced Janneh on 57 minutes, taking up position on the right wing with Alberto occupying the centre of attack. He was soon looking to get on the scoresheet with some clever footwork, rounding the keeper but unable to get in a shot on goal, being forced wide.

Lancing were then dealt a blow when Barrington broke through on the right before finding the bottom corner of the net to restore the 3-goal advantage. Shortly afterwards, Matt Daniel came on for Mark Godson. Lancing had not given up and Alberto received a clever pass from Darius but was dispossessed, with the ball going out for a corner. Lancing’s short corners did not seem to be productive, as possession was lost and the ball finding Barrington who left three defenders in his wake before bringing another fine save from Mitch.

The visitors replaced Barrington and Sammoutis with Gavin Tomlinson and Denzil Gale on 71 minutes.

Matt Daniel did well to pressure a defender and win the ball, slipping it through to Alberto, whose swift turn resulted in him being fouled. His low hard free kick evaded the wall and had keeper Chris Lewington at full stretch down to his left to turn the ball behind for a corner.

Lancing looked to add to their attacking threat bringing on Ben Connolly for Clayton Garner.

Cray Valley made their final change with Nathaniel Blanks replacing Tumkaya on 77 minutes.

Matt Daniel was having a positive influence on the game for Lancing but just as they were building pressure around the visitors’ penalty area, Lancing were almost caught napping after conceding a free kick 30 yards from goal. It was quickly taken with the home defence out of position. Babalola had an unchallenged run on goal but Mitch did superbly reaching out to gather the ball as Babalola attempted to go round him.

Ben was looking lively and combining well with Alberto.They both had close range shots blocked, Ben’s taking an upward spiral off a defender before falling to Matt Daniel to hit the ball home on 86 minutes. The best move of the game followed this with Darius, Matt, and Ben combining before creating an opening for Alberto. He twisted and turned in the box but his final effort went wide. Alberto was again looking a threat with his close control but was closed down as he tried to get his shot away. Lancing kept up the pressure until the end but could not close the gap.

From what looked a desperate situation at half time, Lancing put in a good effort in the second half and, if they can build on this in the games ahead, points will surely come.

Finn Daniels-Yeoman put in a prodigious amount of work and maintained his energy and will to win from start to finish. He was well supported by Darius in the improved second half and Alberto showed his ability on the ball in a more central position, Matt and Ben made valuable contributions from the bench. Mitch again made some vital saves. Early days for Ansu Janneh but there some encouraging signs from him.

Committee MOM was awarded to Finn. 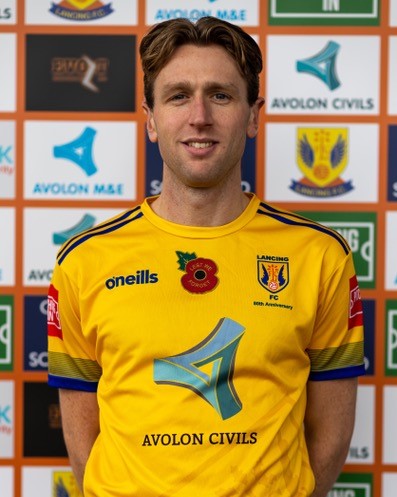