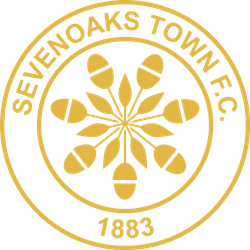 Buoyed by their victory away to Whitehawk, Lancing were looking to maintain their form by leap frogging Sevenoaks, lying just above them in the table. Two new names on the team sheet were Freddie Carter an athletic looking 17-year-old from Gillingham’s youth squad, hoping to gain some experience at Senior level, and Gabriel Robinson.

Lancing began brightly and could have taken the lead within the first couple of minutes. Finn Daniels-Yeoman sent a precise through ball for Matt Daniel to run on to. Visiting keeper, Brad Bridlecard was quickly off his line but a mishit by Matt simplified his task. Within minutes, Sevenoaks could have taken the lead. Alieu misjudged an over hit pass, which was going free and had to race back to divert the ball wide of his upright. He was unable to clear to safety and the ball fell invitingly to a Sevenoaks forward who turned inside with the goal gaping. To Lancing’s relief he fired the ball over the bar.

Lancing were enjoying good spells of possession with Kane Louis dropping deep, holding the ball up well and bringing others into play.

Sevenoaks were hitting long balls into the box without doing any serious damage. Liam Hendy and Freddie Carter were dominant in the air. Misfortune struck on 17 minutes when Mo Juwara was forced to limp off with a further knock to his ankle, having been struck down twice with similar injuries at Whitehawk. Lancing had to reorganise with Will Berry coming on to partner Liam Hendy. Mo Zabadne moved to left back and Freddie Carter took Zabadne’s right back slot.

Ansu Janneh was getting forward from midfield and, for a moment it looked as if he might have had a claim to a penalty when he took a tumble in the box. But, on review, it appeared to be more a case of him falling over his own feet. Kane was prominent in some of Lancing’s most creative moves and was well supported by Tyrese Mthunzi , who displayed an ability to turn away from trouble and leave his marker trailing. Kane provided Ansu a nice lay off, to which Ansu responded with what looked to be a goal bound effort but which flew fractionally wide.

With 42 minutes on the clock, Lancing were the recipients of a lucky break. Bradley Campbell-Francis worked hard to get into a shooting position just inside the box but his shot was blocked. The ball fell to Kane who aimed towards the keepers left. Sevenoaks left back, Lee Conrad, was in the firing line and the ball struck his leg and spun into the right side of the net, with the keeper already committed in the opposite direction.

The inclement weather worsened as the second half got underway, with driving rain and a swirling wind making it difficult for both sides to offer up much quality football.

Ansu continued to forge some good link up play with Kane, and found him in space 25 yards from goal. Kane fancied his chances with a delicate effort aimed for the top of the goal but he got underneath it and the ball sealed harmlessly over the bar.

Sevenoaks caused a momentary panic in the Lancing defence when a a well struck corner from the right fizzed across the six-yard box eluding defenders and attackers and running out of touch on the far side.

Lancing were using Brad’s quickness to good effect and he was on end of a good build up on Lancing’s left, culminating in a pass to Matt Daniel. Matt curled a right foot shot inwards towards the keeper’s top left but it it failed to curl in sufficiently.

14 minutes into the second half, Sevenoaks worked themselves along their left flank with some clever football and were able to lay the ball back from the bye line into the path of Bah Lamin who side footed the ball home.

Lancing made a determined effort to restore their lead with Ansu lofting a pass over the defence for Bradley to run on to but the keeper was quickly off his line to clear the ball as Brad was shaping to shoot.

Matt Daniel was set in on goal by Finn and he finished with a firm strike towards the keeper’s near upright but he was well positioned to get his body behind. Neither was side was able to establish mastery of the conditions and establish a firm foothold on the game and it was beginning to look as if one more goal would be decisive, and it fell to Lancing. Freddie Carter put in a fine cross from wide on the right into the six yard box. Both Kane and his marker stretched to reach the ball as they fell. Kane got there and the ball fell into the path of Matt Daniel who made no mistake and planted the ball into the net.

Destiny Ojo came on for Bradley and shortly afterwards Mo Zabadne broke forward well and crossed to Ansu who headed over the bar. Lorenzo Lewis came on for Kane.

Sevenoaks won a couple of free kicks as the game reached its final stages with Lancing fighting to hold on to their lead, but, from one, a header went wide and, from, the second a well struck effort flashed narrowly past the upright.

The only flash point in the game came late on with players from both sides thronging the referee, following a late challenge which scythed Mo Zabadne to the ground. The incident led to a yellow card for Lamin for the tackle and one for Stephen Smith for persistently arguing with the referee.

Lancing’s defence held firm and three more points were earned. Not a game full of scintillating football, given the conditions, but a solid team display from Lancing, with everyone supporting and encouraging.

Not one standout player for Lancing but an impressive debut from Freddie Carter and some stout defending also from Mo Zabadne, Liam and Will.

The committee felt that the skills on display from Tyrese, which complemented the work rate of Finn and Ansu, were enough to make him our MOM.

Now for the journey to Witham Town next Saturday for the Build Base F.A. Trophy, a special event in Lancing history.