4 goals and a clean sheet rounded off a good victory on the road against SCFL Division 1 opposition. Dave Wilmott reports from Tuesday night's RUR Cup match.

A cup game against a team a couple of leagues lower was an ideal opportunity to rest some players and give an opportunity for others, who have not featured so often, to show what they have to offer. Another centre back pairing saw Joe Rye back after missing a couple of games alongside Clayton Garner, who performed well against Herne Bay. Liam Hendy back after his visit to Italy, where he was hoping to pick up some tips from top quality Italian Seria A players, operating in midfield for this game. The hosts, sitting joint second in SCFL First Division, one point behind the leaders, were not to be treated lightly.

Lancing began on the front foot and within 30 seconds James Rhodes, playing as number 9, broke through a square defence but failed to hit the target. But that was just the hors d’oevres, as 30 seconds later, he again exploited a gap in the defence to run clear and finish with a cool left foot strike into the bottom corner.

On 27 minutes Bradley Campbell -Francis showed his full back a clean pair of heels, looked up and laid a fine pass into the path of Louis Evans, sprinting forward from the half way line. Louis met the ball with a firm strike from 25 yards which skidded low across the turf into the corner of the net.

Midhurst were battling hard but not able to break down a solid back four with Mo Zabadne and Ashley Wadhams showing good discipline marking tight and using the ball well. Clayton and Joe showed excellent positional sense and hardly wasted a pass from the back.

Lancing were in control and gave the hosts a mountain to climb on 35 minutes, when Lorenzo Lewis finished off some good close control by cutting inside and curling a fine shot from distance out of the keeper’s reach.

The second half began with the introduction of Anesu Sisimayi for Joe Rye , with Liam Hendy dropping back alongside Clayton Garner.

Lorenzo came close to a second finishing off a determined burst of pace with a good effort, which nestled into the side netting.

Midhurst showed plenty of spirit, despite the three-goal deficit and their number 9 was a handful and prepared to shoot when free of defenders, coming close on 52 minutes with a shot on the turn, which was only narrowly wide.

Lancing came close to a fourth after a short corner was played to James Rhodes who floated a cross towards the goal, where it was headed away from just under the cross bar.

With just over 30 minutes to go, Conrad Honore and Gabe Robinson came on for Louis Evans, who had impressed in midfield and Bradley Campbell-Francis, who had tormented his full back.

There was momentary scare for Lancing when Alieu Secka , under pressure, was unable to get firm hands on a ball curled in from a corner, but good defending put it out of harm’s way.

Lancing finally got their fourth on 80 minutes. A superb pass from Gabe Robinson was met at the far post by Lorenzo Lewis , who volleyed the ball high into the roof of the net from a couple of yards.

Midhurst’s number 9 was still attempting to get on the score sheet, but a good strike was again just wide of the upright.

Lancing were content to see out the game comfortably but, with a couple of minutes left, an unsavoury incident led to a mass coming together of players from both sides with a lot of pushing and shoving. Without dwelling on the initial cause or trying to apportion blame, the lesson to be learned is that those who retaliate, despite the provocation, are usually dealt with more severely. Suffice it to say Lancing were reduced to nine men with the dismissal of Gabe Robinson and Lorenzo Lewis, with a red card also being issued to one Midhurst player. A sorry end to what had been a competitive game played on a difficult pitch and in biting cold.

Some good performances again throughout the team and those less regular players certainly showed their capabilities. James Rhodes led the line well and there was some tenacious tackling from Mo Zabadne. The committee members present, who braved the cold, were impressed with authority and midfield drive shown by Darius Goldsmith and he was chosen as MOM. 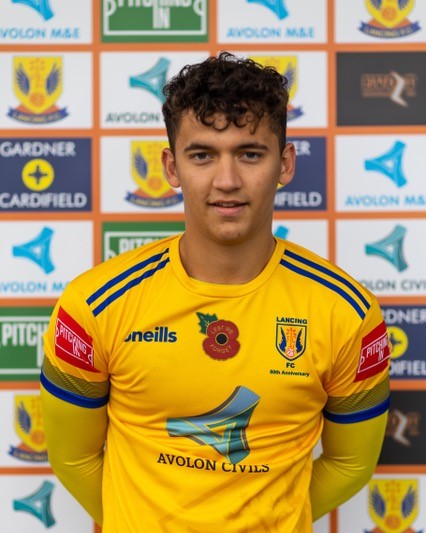