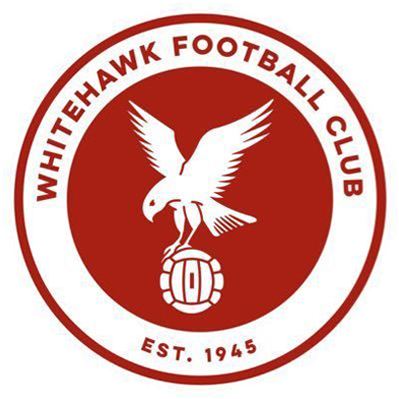 They say you should never count your chickens until they are hatched. As we approached the last couple of minutes of this match, my mind wandered to the match report I would be writing and these words popped into my head: “Lancing achieved their first double of the season……….” Foolish chap that I am, in not allowing for the unexpected and for the decision of one man which would have a major influence on the result.

Lancing began with confidence which flowed from knowing that they had come out on top in the away fixture, albeit by a narrow 2-1 margin. After resting a hamstring strain and sitting out the Ashford game, Finn Daniel -Yeomans was back and, as early as 4 minutes, embarked on one of his lung busting runs to get on the end of a fine pass from Liam Hendy over the top of the visitors’ defence and stretch to get in a shot which was inches wide of the upright.

This was the first of a string of searching passes aiming to exploit the pace and strength in possession of Lorenzo Lewis on Lancing’s left wing and Mo Zabadne, powering forward from the right back position.

Mo Zabadne reached a pass from Liam, and cut the ball from the bye line into the six-yard box from which it was cleared. Zabadne then initiated a flowing move, feeding the ball to James Rhodes who sent it wide to Lorenzo Lewis, whose pace took him to the bye line from where he drove the ball with power low and close to the goal line. Ismaila got down at full stretch to attempt to slide the ball towards the goal but he was marginally short of making contact.

Whitehawk had been pegged back so far but, on 14 minutes, Tegan Freeman got on the end of a deep cross from the left only to put his header over the cross bar. Lancing continued to break forward as Mo Zabadne took the ball from deep, into the opposition half, before switching the ball to Lorenzo Lewis, who again motored to the bye line before driving in a cross, which, once again, eluded a team mate.

Whitehawk were trying to feed their tall number 9, Javan Splatt, by sending long high balls into the Lancing penalty area but Will Berry and Liam Hendy were able to deal with them and take control and calmly bringing the ball out from the back. Alex Laing, once of Lancing F.C., got on the end of one long cross from the right but there was a coming together of him, Mo Zabadne and Alieu Secka. The ball ran loose before Alieu Secka was able gather it in. Both Laing and Zabadne were injured in the process. Laing was able to walk away but Mo Zabadne needed treatment. Shortly afterwards Laing himself needed treatment, possibly as a result of this incident. Perhaps this caused him to be substituted later on, after 54 minutes.

Lancing’s attacking play finally paid dividends on 30 minutes. Finn Daniels-Yeoman lofted the ball over the Whitehawk defence and Lorenzo Lewis struck it in an instant as it dropped over his left shoulder, powering the ball beyond keeper Nathan Stroomberg-Clarke to give Lancing the lead. Lorenzo came close again 5 minutes later. James Rhodes did well to retain possession under pressure feeding Lorenzo Lewis, who showed how difficult it is to take the ball away from him, by shrugging off tackles to hit the ball with his left foot only for it to curl away from the upright.

An unfortunate rebound from Liam Hendy presented Alex Laing with a great opportunity to cancel out Lancing’s lead on 37 minutes, but he snatched at his goal effort sending it well wide. Another opportunity fell Whitehawk’s way when Will Berry conceded a corner as he was put under pressure trying to make a back pass to Alieu Secka. Whitehawk were able to make contact with the ball in from the corner but only to head the ball too high. The half finished with the speedy Ismaila Diallo coming close to intercepting a headed back pass to Stroomberg-Clarke.

The second half began where the first left off with Ismaila Diallo closing down a defender quickly to win a corner, from which Lancing were unable to profit. James Rhodes turned away from his marker and was making strides towards the opposition penalty area, only to be halted with a foul tackle by Tegan Freeman.

Alex Laing’s participation ended on 54 minutes with James Fraser coming on. He was soon having an impact with a good shot from the bye line which finished in the side netting. Whitehawk followed their first substitution with a second on 59 minutes when Ollie Munt replaced Tegan Freeman and he was soon trying his luck from the edge of the box but firing his shot too high.

Lancing made their first substitution on 60 minutes with the introduction of Modou Jammeh for Anesu Sisimayi. Whitehawk were more of an attacking threat in the second half forcing Lancing to drop deeper, with Lorenzo Lewis having to provide defensive support. Omarr Lawson did well to evade the close attention of Finn Daniels-Yeoman and deliver a cross but it ran harmlessly out of play.

Lancing did test Stroomberg-Clarke with a firmly driven free kick from Lorenzo Lewis, which he did well to block as it swerved en route. Mo Zabadne got involved with a tangle of legs with Javan Splatt. Mo might have been penalised but referee Peter Lowe wheeled away, following play and did not see Mo receive a blatant kick from Splatt, as he lay on the ground, right under the nose of the assistant referee (linesman). When the ball became dead the referee spoke with both players.

Whitehawk were making use of high balls into the Lancing box to maintain their momentum and Alieu Secka had to be alert to reach the ball and punch it clear to prevent Javaun Splatt from getting his head to it. Both players collided with Splatt requiring treatment.

Lorenzo Lewis continued to be Lancing’s most likely scorer, losing his marker and putting in a powerful shot which went low past the upright. On 76 minutes Lancing turned to the fresh legs and pace of Brad Campbell-Francis who replaced James Rhodes who had worked hard for Lancing linking between defence and attack.

Brad linked up with Ismaila Diallo to launch an attacking run but this broke down and Javaun Splatt counter attacked, muscling his way past Will Berry to deliver a shot which flew past the far upright.

Pressure was mounting on the Lancing defence but they were holding their ground well and Alieu Secka was showing a safe pair of hands to hold on to anything which came his way.

With less than 10 minutes to go, Whitehawk made their final substitution, replacing Henry Muggeridge with Lekan Orimolusi.  As the minutes ticked away, there were some anxious looks on the faces of some home supporters who had been hoping that Lancing could ease the pressure with a second goal but very few good chances had been created in the second half. With only a couple of minutes of normal time remaining Lancing introduced proven goal scorer Matt Daniel but before he could begin to have any real impact Whitehawk got the equaliser they had been seeking. It came in somewhat controversial circumstances. With a couple of minutes left Alieu Secka and a Whitehawk player both challenged for a high ball aimed from Whitehawk’s left towards the far post. Alieu was unable to reach the ball which fell to a Whitehawk head but which then flew over the cross bar. Both players were injured as they came together in mid-air, with Secka coming off worse. He was down for a good 5 minutes receiving treatment for a shoulder injury. There was some uncertainty about what the referee had decided but, whilst treatment was continuing, it became clear that he had awarded Whitehawk a penalty.

Bravely, and obviously suffering, Alieu Secka took his place between the sticks. He had no hope of keeping out Ollie Munt’s well struck spot kick. That was the end of Alieu Secka in the goal, as Harrison Parker stepped in as emergency cover for the last couple of minutes (and kept a clean sheet he pointed out!!!)

A game which had begun so promisingly for Lancing, with some regular supporters expressing the view that Lancing’s first half display was their best this season, ended disappointingly and controversially. There was some really dynamic forward play with Lorenzo Lewis and Ismaila Diallo pressing high in the first half and, once again, real effort from the midfield and a back four in control.

A second goal, at least, is vital to put some distance between teams at this level and, the longer play continued, the greater the risk of the opposition being able to close the gap. Lancing have dropped into the slot one above bottom place but 6 or 7 clubs are all catchable if the results go our way. There is every belief in the team to achieve that, especially if Lancing continue to receive good support at home.

A good crowd of 370, with Whitehawk bringing a loyal band of followers, created a great atmosphere with plenty of vocal support for both teams. In the end a draw was probably a fair result, but for Lancing there was a feeling that when two players were competing for a high ball the result, almost inevitably is a collision. But to penalise Alieu Secka, the injured party in more sense than one, seemed very harsh.

For a superb attacking display, mainly in the first half, some solid defensive back tracking when necessary and a fine goal, the committee selected Lorenzo Lewis as MOM.

Latest news on the injured Alieu Secka is that there are no broken bones but he is likely to be absent for a couple of games. We all thank him for another brave goalkeeping display and wish him a speedy recovery. 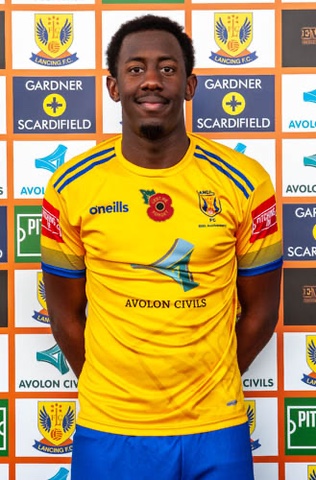