Lancing move up to 16th place in the table after a 2-0 victory against The Wasps on Saturday. Dave Wilmott reports. 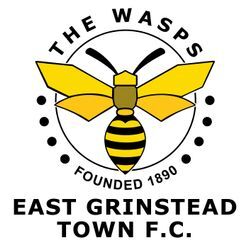 Culver Road survived Storm Eunice relatively unscathed and a safety inspection enabled the Lancing v East Grinstead fixture to go ahead. But East Grinstead received a battering from `Storm Destiny’ and did not come away unscathed.

When these two sides met earlier in the season, Lancing fought back from one down to equalise, thanks to a late goal from Lorenzo Lewis.

Lancing welcomed back Will Berry, who missed the defeat by Corinthian and Destiny Ojo was in the starting line-up for Gabe Robinson.  Modou Jammeh came in for Anesu Sisimayi. Mo Juwara was delayed en route to Culver Road, so a late switch saw Mo Zabadne coming in.

With very few points separating the bottom eight teams, it was imperative that Lancing kept East Grinstead within touching distance and bounced back from their below par performance away to Corinthian. Three points was the target.

Eunice had calmed down but a strong wind still blew and Lancing had it in their favour as the game kicked off. Would Lancing have the strength of character to show that a below par performance, costing them three points at Corinthian, was a mere blip?

Lancing began on the front foot and did not make the mistake of trying to use the wind to hit long hopeful balls which would inevitably run beyond their attackers. Lancing were looking sharp and in the first minute Destiny Ojo tested Wasps keeper Sam Freeman, who fumbled the shot but quickly recovered. Lancing were showing good determination and had Wasps penned back. Liam Hendy twice initiated some good attacking play breaking out from the back. Modou Jammeh and Matt Daniel were combining well with some scintillating one touch football and both Isaiah Corrie and Destiny Ojo were using their pace and power on the flanks to keep Wasps penned in their own half.

Lancing’s first real threat on goal came from Isaiah Corrie who cut in from the left and let fly with his right foot from 25 yards, forcing Freeman to fingertip the ball over the bar, conceding a corner. Destiny’s corners from the right, (and Lancing were winning a good number of them), were swung in with his left foot and were difficult for attackers and defenders to judge as they swirled in the wind.

A strong run from Isaiah Corrie earned Lancing a corner, and a change of tactic saw Destiny Ojo playing a short corner to Darius Goldsmith whose well struck effort on goal just cleared the cross bar. Modou Jammeh was put clear by a clever pass from Matt Daniel but he tripped over himself as he was bearing down on goal. Jammeh and Daniel had developed a good understanding and they combined again cleverly with two deft touches, one from each, to put Destiny Ojo in behind but he was tackled with the ball going out for a corner. Destiny swung the ball in from the right and it came close to going straight in but bounced on top of the cross bar.

Lancing were dominant with 30 minutes on the clock but with nothing to show for it. Jammeh and Corrie linked well to create a scoring opportunity for Finn Daniels-Yeoman but keeper Freeman got down well to deny the Lancing skipper. The half ended with Lancing winning a couple more corners from which they were unable to profit and with Lancing’s keeper Alieu Secka not having to extend himself.

Destiny Ojo continued to terrorise the Wasps defence and earned his side a reward within 4 minutes of the restart, bursting down the right and firing the ball goal wards. The home defence failed to clear it and somehow the ball ended up in the net with the general consensus being (confirmed to me after the game by referee Michael Hayden) that keeper Freeman had scored an own goal. Destiny’s tail was up and, within minutes, he had forced Freeman down to cut out a cross and, again bursting with pace down the right, drove in a shot which brought a good save from Freeman.

The Wasps made their first substitution on 60 minutes with Uchechi replacing Max Walsh. Lancing were indebted to Mo Zabadne , injured in the process, who made an important tackle to halt a dangerous break by Miles Cornwall. On sixty-six minutes Alieu Secka, under no pressure and with no attacker anywhere near, reached for the ball at the edge of his penalty area, and, responding to howls of protest from the Wasps touchline contingent, referee Hayden awarded a free kick against Secka and served him a yellow card, on the grounds that he had handled the ball outside the area.  A yellow, not a red, because he had not prevented a clear goal scoring opportunity.  The Wasps free kick ended with the ball over the line but the “goal” was disallowed, the referee indicating that Secka had been pushed causing the ball to cross the line.

Wasps were enjoying a good spell at this point and had a penalty claim waved away as Uchechi took a tumble, under pressure from Will Berry, as he reached the six-yard box.

On 69 minutes, Adetokunbo Zambara came on for Thomas Summerfield and on 78 minutes, Mo Zabadne, still troubled by an earlier injury, gave way to Mo Juwara. Shortly afterwards Matt Daniel found acres of space on the Lancing right, close to the half way line, and made a determined run on the Wasps goal but took the ball too close to the keeper who turned it behind for a corner. Wasps made their final substitution on 84 minutes with Szymen Kowalczyk coming on for Omar Folkes.

Within a minute, Destiny Ojo shattered Wasps hopes of at least drawing level, cutting in at pace from the right he unleashed a thunderbolt of a strike with his left foot, which buried itself in the keeper’s top right corner in a blink of an eye. Andrew Dalhouse came on for Isaiah Corrie for the last three minutes of normal time to help Lancing retain possession, and a couple of minutes later Destiny Ojo limped off to loud cheers, with Gabe Robinson taking his place.

Wasps were a spent force by this time, having put in a much better showing in the second half, without seriously troubling Alieu Secka.

Three vital points were a just reward for some fine attacking play. Lancing were more of a threat in the first half with Isaiah Corrie and Destiny Ojo showing pace and power on the flanks and Matt Daniel and Modou Jammeh combining with some clever interplay. Darius Goldsmith and Finn Daniels-Yeoman were dominant in the centre of the park and the back four, benefitting from the return of Will Berry coped with any threats which came their way.

But there was some concern at half-time amongst some of the home supporters that Lancing could not turn their superiority into goals, and knowing they would have to face the strong wind in the second half. But Lancing approached the second half intelligently, trying to keep the ball on the ground and maintaining possession.

Lancing now occupy 16th place on 28 points, within a point of East Grinstead and of their next opponents, Faversham.

All credit to Alex Walsh, Kane Louis and Matt Evans for getting Lancing back on track and for a team selection which gave starts to Destiny Ojo and Modou Jammeh, who made important contributions to the victory.

Everyone who spoke after the final whistle was in no doubt that Destiny Ojo deservedly earned the award of MOM and he was the committee’s choice. One of the best goals we have seen this season and one which ranks alongside a similar finish from Lorenzo Lewis. 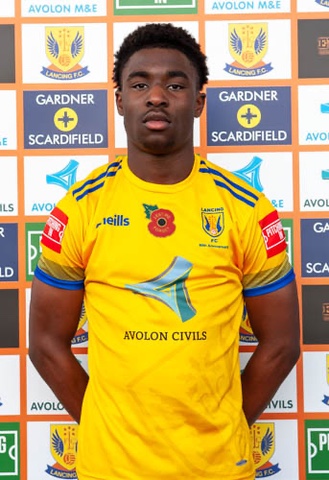