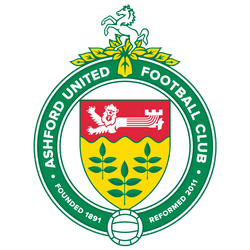 As the runners and riders in the Grand National contemplated having to surmount Bechers and The Chair, Lancing had to face their own equivalent in the shape of top two sides, Ashford Utd and Hastings, as their season was coming to a close. A quirk in the fixtures meant that Lancing’s other two games were against the two sides lying below them in the table. Phoenix, away, and Whitstable, away. Both are now three points behind Lancing but with a game in hand.

Lancing had acquitted themselves well in the away game against the side known as The Nuts and Bolts on January 8th, fighting back to draw level after trailing 2-0, with goals from Joe Rye and Ismaila Diallo. None of the goal scorers (including Jay May and Tashi-Jay Khwaji for Ashford) from that game featured in today’s fixture.

It took Ashford less than three minutes to show why they occupy second spot as they hit the ground running and Lancing were indebted to Alieu Secka for two superb point-blank saves to keep the scores level.

Lancing looked lively themselves with Matt Daniel feeding a pass to Isaiah Corrie whose pace took him to the by-line, winning a corner which ended with a foul (the first of a number) on Lorenzo Lewis. At the other end, Alieu Secka was kept busy and needed to show alertness and safe hands.

Darius Goldsmith was full of energy in Lancing’s midfield, well supported by Finn Daniels-Yeoman and Modou Jammeh and they were proving to be a handful for the visitors. The first caution of the game was awarded to Jack Richards who caught Darius Goldsmith with a rash tackle leaving Darius stretched out in pain.

Darius was then penalised himself three minutes later and also received a caution.

Lancing created their best chance of a goal around the twenty-minute mark. A delicate chip over the top of the defence by Darius dropped perfectly for Modou Jammeh who had cleverly anticipated the pass. Modou connected with the ball as it dropped but his effort landed tamely in the arms of keeper Jordan Carey.

Lancing’s rhythm was being disrupted with fouls on Modou Jammeh and Lorenzo Lewis as they were threatening to break into the opposition penalty area. Lorenzo was pulled back after a clever turn threatened to put him in the clear and, surprisingly, the culprit had no more than a free kick warded against him. Finn Daniels-Yeoman was making some powerful runs towards the opposition defence and after one good break set up Matt Daniel for a first time shot on the turn but not enough power or direction to pose much of a threat to Carey.

Ashford were showing their attacking prowess as the half progressed and an opportunity to take the lead was spurned with a miscued volley from the edge of the box. This was followed by a dangerous run along the left bye line, with the ball being laid back resulting in a shot on target which Harrison Parker slid down and blocked from crossing the goal line. Four minutes later, on 33 minutes, another swift attacking move down the left led to the ball reaching Jack Richards on the edge of the box. He appeared to mishit his shot downwards into the ground but there was sufficient power to cause the ball to take a sharp, high upward trajectory, catching Alieu Secka far enough forward for the ball to drop behind him and over the line.

There followed a period of sustained pressure on the Lancing goal with a trio of corners. Alieu was twice called upon to clear from his goal line and Harrison Parker got his head to clear the ball as it fell into the six-yard box. Solid defence by Lancing ‘s back four was keeping them in the game and they were able to launch a swift counter attack with the ball reaching Isaiah Corrie in space on the right. He made rapid strides towards bye line but his cross fell straight to keeper Carey.

Mamadon Dialllo broke forward with a determined run from deep on the right and crossed to the far post where centre forward Luke Burdon created space for himself to plant a firm header down at the upright. Alieu Secka attempted to dive low and turn the ball aside but it squirmed beyond him and over the line to put Ashford two up on 39 minutes.

Alieu Secka was called upon to make another important save as half time approached with Lorenzo Lewis lying injured as Ashford launched their attack.

Lancing came out for the second half with real determination to make an early impact. Modou Jammeh showed a good burst of pace to get in behind finishing with a shot on target which keeper Carey dealt with comfortably. Lorenzo Lewis continued to torment the visitors defence, but, once again, was halted by a foul tackle. A good spell of possession with Mo Zabadne linking well with Matt Daniel and Modou Jammeh enabled Lorenzo Lewis to be brought into play on the left and he cut in letting fly from outside the box only for his effort to be high and wide of the goal. Lancing then had to defend a couple of consecutive corners but Alieu rose well to palm the first clear and behind and hold on to the second as it curled in goal wards.

Harrison Parker had shown his usual pace and power at left back and a strong run 8 minutes in to the second half won him a corner but Lancing could not turn this to their advantage.

Lancing were looking threatening on their right flank with Mo Zabadne pressing forward and providing a series of penetrating passes. Matt Daniel worked himself towards the right corner holding a ball up well until being unfairly shoved off the ball by Jarred Trespaderne, conceding a free kick. A clever pass from Mo Zabadne was well anticipated by Modou Jammeh who, in turn, found Matt Daniel who fired the ball towards goal but straight at keeper Carey.

Ashford continued to look dangerous on the break and Alieu Secka produced a good blocking save from a right-wing cross, with Liam Hendy on hand to complete the clearance.

It was Lancing’s substitution which bore dividends on 73 minutes when Bradley Campbell-Francis latched on to a fine pass from Darius Goldsmith, and cut inside from wide on the left before finishing with a low drive into the bottom corner. This was the boost Lancing needed to spur them on in the last quarter. Ashford were getting a bit nervy and this led them being penalised as the game reached its latter stages, and there was  some time wasting by keeper Carey. Referee Peter Dingle exchanged a few pleasantries with the keeper but left it at that. Harrison Parker was powering towards the visitors box before being upended with a trip. The resultant free kick was rather wasted. Lancing made their final substitution with Lorenzo Lewis, who had once again worked his socks off, being replaced by Alfie Hall on 82 minutes. Shortly before this Ashford had replaced Adem Ramadan with Daniel Hull.

Bradley Campbell-Francis was causing problems with his pace and electric burst saw him scampering along the bye line only to see his cross being cut out and the danger cleared.

James Rhodes was making himself available in and around the box and this looked to have paid off when his legs appeared to have been taken away from him inside the area on 84 minutes. Referee Peter Dingle saw nothing to justify the award of a penalty, much to the dismay of Lancing’s players and supporters. He was the man on the spot so one would assume, being close to the action, he would have made the correct call. But when you look at the incident, perfectly captured by the lens of photographer Paul Smith, the sense of injustice lingers.

Could history repeat itself and Lancing cancel out a 2-goal deficit? The players believed so. Liam Hendy hit a powerful drive from 30 yards which was well held by keeper Carey. Alfie Hall initiated a good move bringing Mo Zabadne and Darius in to play. Darius hit a deep cross which produced a corner which was hit too deep for any contact to be possible. Modou Jammeh then jinked his way into the box but was dispossessed before he could get a shot away. Two further cautions were issued to Ashford players. Jordan Carey tried to steal a few yards to take a free kick and continued to try and waste time and received a caution as play entered added time. Francis Collins was also cautioned. A James Rhodes free kick was curled towards the far post but was well held by Carey. The game came to an end with two long throw ins by Harrison Parker which kept up the pressure but which failed to lead to an equaliser.

Once again Lancing more than matched their higher placed opponents. There were fine performances throughout the Lancing team. Sound defending, full backs getting forward, some fine control from the midfield and some clever attacking play, particularly along the flanks. But when you analyse it dispassionately, you have to acknowledge the fact that Ashford made the most of limited opportunities whereas Lancing did not seriously test Jordan Carey in the visitors goal.

It is all well and good to read complementary comments from Ashford manager, Tommy Warrilow in the Ashford programme and to hear him, and others from Ashford say we are too good to go down. We need to convert such optimism and praise into goals. The players are certainly giving their all and as our Chairman Steve Taylor acknowledges, it must be particularly hard for those of our players abiding by fasting rituals, during Ramadan, to maintain their usual energy levels.

We at Lancing F.C have utmost belief that our players can achieve what is necessary to secure their place in the league.

We need all the support we can get for the remaining games.

MOM award could have gone to several players but Alieu Secka impressed with a number of superb close range saves and safe handling of high balls floating dangerously close to the goal line. He was unlucky to be deceived by a rather freak goal attempt for Ashford’s first goal and was so close to keeping out the second. So well done Alieu. 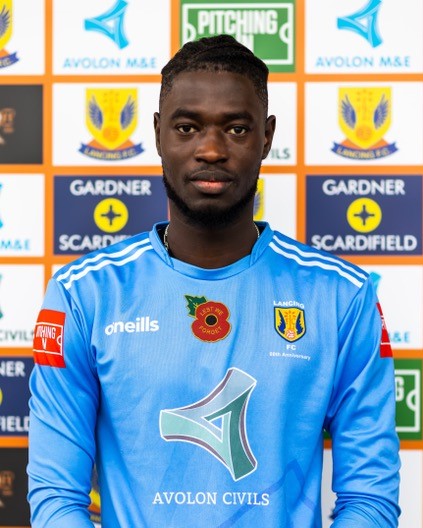