Get an insight into the committee members who manage the club.

Learn more about the people that help to manage the club, why they got involved, hobbies & interests, and what their role generally involves.

All committee members are volunteers and elected by vote at each season’s AGM. 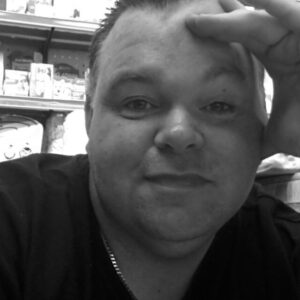 Steve joined as Chairman of the Lancers at the beginning of the 2018/19 season and has seen the club progress from strength-to-strength since.

Steve has been in county football for some 22 years after being an avid Albion fan in the 80’s and 90’s. As a lad he always watched Lancing, whether it was their 1st team or ressies (those were the days he could jump over the wall!).

Steve’s first role was as Commercial Manager for Lancing FC in the late 90’s, which saw him stay three years before moving onto pastures new. He had a couple of spells as Vice Chairman at Worthing United before going to Southwick as Chairman and then returning to Worthing United as Chairman. After serving four years at the Mavericks an opportunity became available to Chair Lancing Football Club and Steve ‘returned home’.

“I believe my experience Chairing at three different football clubs, coupled with the knowledge of the internal running of County football clubs as well as previously owning and running 4 businesses has made this a perfect match for myself. I am really lucky to have a committee who are experienced and share the same passion to take our club forward. Up the Lancers!”

You’ll often find Steve in the hospitality suite, stand or in the clubhouse on matchdays. 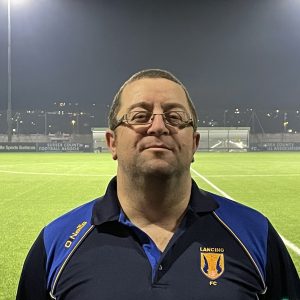 Barry is an avid football & Lancers fan and Vice-Chairman of the club.

“I started watching Lancing in 2015 and joined the committee in 2017. I have been Social Media Manager, Community Engagement Officer and Commercial Manager before becoming Vice Chairman at the beginning of the 2018/19 season and also represent the club on parish council committees. I am also occasionally on Twitter duty and if a controversial tweet is sent out it is usually me to blame.”

“I used to play at Right-back but had to give up when my knees began to ache too much! Originally from Dover I am also a Dover Athletic Supporter and used to follow them home and away including to Gateshead which was the longest journey in football at the time. I currently work for the Ministry of Justice as a project manager in London which means early morning train travel most weekdays. Partner to Emma (of Cakes by Emma fame) and father to Charlie, Esme and Matthew. I always try to use our sponsors whenever possible which is why I can often be found in the Stanley Ale House or the Naaz restaurant.”

You’ll often find Barry selling merchandise near the turnstile, or in the press box on tannoy duty on matchdays… And ‘looking after’ the cake at half-time. 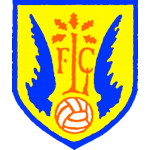 Clive is a long-standing committee member and huge asset to the club, ensuring that fixtures & results, league administration and our operations are organised smoothly, with a lot of behind-the-scenes work & dedication.

Fixtures Secretary and Programme Editor, Clive has also recently took on the acting role of Honorary Secretary to support the club’s administration and secretarial duties.

You’ll often find Clive near the hospitality suite or team whiteboard on matchdays. 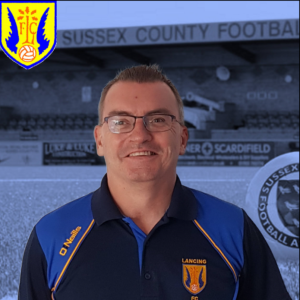 Paul is an avid Leeds & Lancers fan and is an integral part of the committee.

Alternating between working in Leeds and here in Lancing, although he cannot always attend fixtures, Paul helps to ensure that our finances run smoothly and bills are paid on time.

As one of our longest-serving board members, Paul is a well-respected and likeable character at the club. 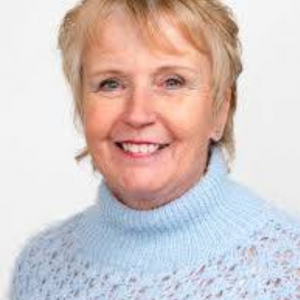 Gloria joined the committee in her original role of Lancing Parish Council Representative in 2018, offering a vital link between the Parish Council and Lancing Football Club.

“I loved the club and the people so much that I asked to stay on as a member of the Committee after my time with the Council ended.”

“This year I have been excited to take on the role of Safeguarding & Welfare Manager, managing those operations with young Jack. This role enables me to use the knowledge and skills that I gained as a social worker and safeguarding lead for two London local authorities, and then as a safeguarding consultant in my own business down here in Lancing.”

“I love working with people, and as a Christian, I believe I have the compassion necessary to provide appropriate and sensitive support to those who might need it.  I’m also firmly of the belief that with appropriate systems and procedures in place and adhered to, flexibility, warmth and a relaxed atmosphere can follow. LFC is proof of that.”

“Being retired from paid employment, I have time for the pastimes I enjoy, including writing and illustrating children’s books, and writing adult memoirs and novels. I also love art, but seem to have little time to fit that in.”

“I really enjoy being among the people on match-days. I’m gradually getting to know lots of spectators, which I love. You might see me at the gate, helping Brian with the raffle, or showing people to their seats in the stands. You might hear me shouting for the Lancers during the matches (Yes, I’m the one with the croaky voice … sorry). Whatever I’m doing, I just love being part of LFC, the best community team ever!”

You’ll often find Gloria on the raffle or in the stand on matchdays. 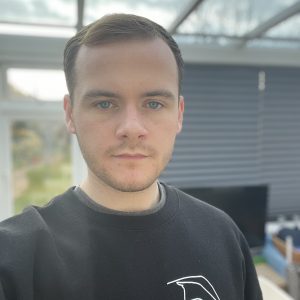 Jack manages the club website, social media accounts, communications & online administration duties and is a part of the safeguarding team run by Gloria. In addition to his studies and work for the university, Jack has training from the NSPCC, The FA, YGAM and Football v Homophobia to support his role here.

“I am a full-time student at the University of Sussex, studying Geography with Anthropology, also working in outreach as a Widening Participation Student Ambassador. I am passionate about my field, aspiring for a career in research. In my spare time outside of studying I enjoy exploring Brighton & Hove with mates, reading, taking advantage of any extra-curricular activities and training opportunities, and volunteering on the Lancers’ board.”

Jack first got involved in football at an early age, watching Lancing at Culver Road as a toddler, later spending 4 years in his teens as volunteer Stadium Manager at Worthing United, and being a volunteer in the Heartbeat United Guinness World Record World’s Longest Football match, before joining Lancing in 2018. 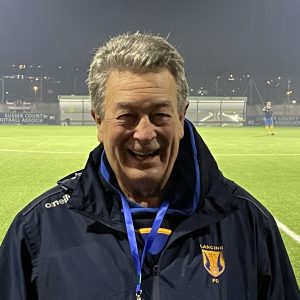 Ron is a seasoned non-league volunteer and former player who joined the committee at the beginning of the 2018/19 season.

A Mechanical Engineer then into Electronics. extensively travelling and working in Eastern USA and Canada, Western Europe and Middle East, Ron specialised in setting up production lines and advised on cost saving schemes.

Ron started playing in 1963 and added administration in 1970. He played for 33 years with his father’s club Abbey Rovers who became Lancing & Sompting Legion which then became Lancing United. In 2018 he found that he did not agree with the direction in which Lancing United were going and decided to leave. Old playing pal Paul Blann persuaded him to join Lancing FC and Ron has been very happy at the club since.

Ron is an all-round experienced committee member, in charge of club history, and also assisting on matchday’s and helping to maximise cost efficiencies & tax for the club.

You’ll often find Ron on the turnstile, raffle or in the stand on matchdays… And in the bar afterwards. 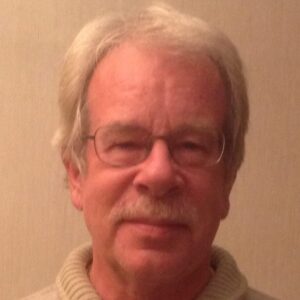 Geoff is on the committee as Lancing Parish Council (LPC) Representative, feeding back on LPC projects & latest news, and feeding our news back to LPC, ensuring that we maintain a close relationship with our local Parish Council, and offer each other assistance through short & long-term projects.

A vocal supporter & a great character to have on the committee.

You’ll often find Geoff in the stand with a beer & burger cheering on the Lancers on matchdays. 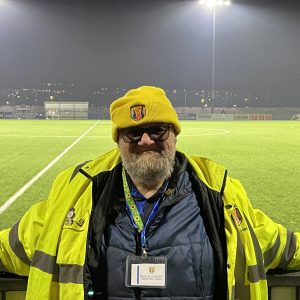 Grahame is one of the latest additions to our committee, joining near the end of the 2019/20 season, and has been welcomed warmly onboard.

Grahame’s primary role is as Safety Managing, ensuring that we have appropriate stewarding in place for matchday’s, primarily for the first team, but also for our other senior teams who play at Culver Road. Enthusiastic & knowledgeable, the club is also supporting Grahame in receiving the latest spectator safety training to assist in his voluntary role.

Grahame also assists as Bingo Officer along with Brian to help to run our fortnightly Bingo Nights.

You’ll often find Grahame near the turnstile, hospitality suite or patrolling the ground on matchdays. 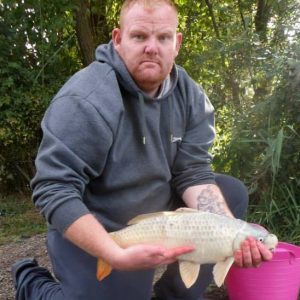 Shane is a new addition to our senior committee and a great guy to have on board.

A trained SIA bouncer and with a wide skillset suited to stewarding, crowd control and security, Shane helps to ensure that players, officials and supporters are also safe on matchday’s at Culver Road. Shane & Grahame are two new additions to our team but are vital in maintaining our safe, welcoming atmosphere at our HQ in Lancing.

You’ll often find Shane near the turnstile, hospitality suite, or patrolling the ground on matchdays. 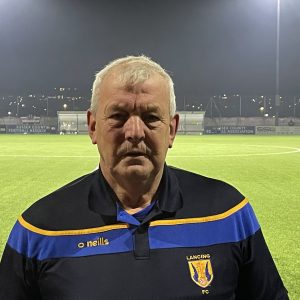 Brian has been an experienced Lancers supporter, always helping out where needed, and official joining the committee during the 2018/19 season.

A reliable & faithful supporter and committee member, helping to run the raffle on matchdays, helping put out traffic cones, and hosting the fortnightly Friday bingo night along with Grahame at Culver Road.

You’ll often find Brian on the raffle on matchdays. 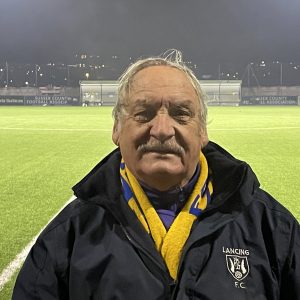 Sporting interests: Football, cricket, formula 1, horseracing, rugby and many others.

Moved from London to Sussex 1996. Drove train at Brooklands Pleasure Park for 6 years and known as Mr. Diddly. Became a volunteer for the RVS.

Favourite players too many to mention, let’s say the whole team.

I love my football, especially Lancing. COME ON YOU YELLOWS.

You’ll often find Terry in the hospitality suite or stand on matchdays, helping wherever needed, although you will probably hear him cheering first. 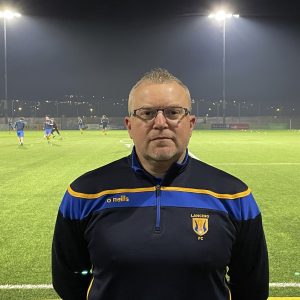 Wayne joined the Lancers as Manager of the Ladies, Disability and Under-23s at the beginning of the 2019/20 season.

A dedicated, knowledgeable, calm, positive coach who has earnt the respect of the players & officials around him alike.

Also on the senior committee, Wayne is always keen to offer a hand with tasks, attend meetings & feedback to us on matters primarily relating to the Disability & Women’s teams.

You’ll often find Wayne supporting in the stand & liasing with players, when not coaching, on matchdays. 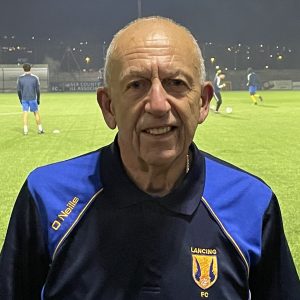 Dave joined the Lancers committee in 2017, and is now the club match reporter.

Originally from Wales, and a keen sportsman and football-lover, Dave is a positive, dedicated member of our board, and his reports are some of the best in the county. 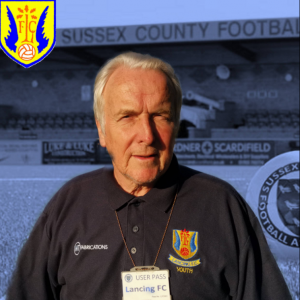 Tony is a great asset to the club, and is vital in ensuring the organisation of kits, management support and as a vital member of the board.

With over a decade of behind-the-scenes service, Tony is a respected figure within the club.

You’ll often find Tony in the player’s tunnel on matchdays. 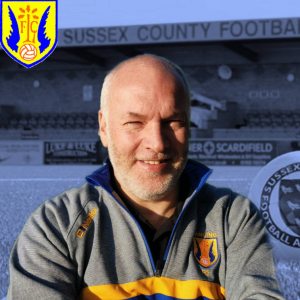 Brendan is an all-rounder and is a committee member on our senior committee, secretary for the youth section, and is also on the board of a local youth football league.

An integral link between the senior & youth sections of the club, and played a vital role in establishing Lancing as a community football club. Brendan coordinates the Lancers’ FA Charter Standard Community Club status renewals and ensures we meet strict criteria to maintain our accreditation.

You’ll often find Brendan assisting Tina with the turnstile or hospitality on matchdays. 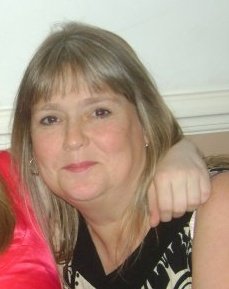 Tina is a lover of football and always willing to support the committee operations, including on the turnstile on matchdays. Reliable, hard-working and kind.

In addition to being on our senior committee, Tina also helps to support registrations across our Youth Section, subs collection from our Under-18 & Ladies squads, and assists a local youth football league in their operations too.

You’ll often find Tina on the turnstile or hospitality suite on matchdays, or at Stamford Bridge supporting the Blues!